Club foot can cause serious problems if not treated timely treated 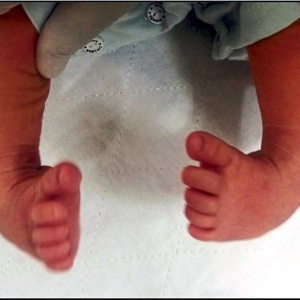 Clubfoot is a birth defect where one or both feet are rotated inwards and downwards at the same time. Dr Ashwani Maichand, a leading orthopedist explains that sometimes the defect is visible through naked eye as the affected foot, calf, and leg is smaller than the other. People often tend to walk on the side of the feet if the treatment is not done.

The cause of clubfoot is unknown even though there are many hypotheses about how clubfoot develops. Some include environmental factors, genetics, or a combination of both. Dr Ashwani Maichand states that under development of the bones and muscles of the embryonic foot can also be the reason of club foot defect. Also, If either of the parents or their other children have had clubfoot, the baby is more likely to develop it as well.

Clubfoot normally doesn’t cause any problems until the child starts walking. If the clubfoot is treated, the child will most likely walk normally but may face some issues with the following:

Movement: Movement may be limited in some cases.

Shoe size. The affected foot is usually smaller than the unaffected foot. Dr Maichand explains that club foot can cause serious problems if not treated at the right time. Some of the problems are listed below:

Arthritis. A child with club foot is likely to develop arthritis.

Poor self-image. The unusual shape of the foot can give an unusual look to the body especially in teen age.

Inability to walk normally. A child may not be able to walk on the sole of the foot due to the twist of his ankle.

Treatment is usually done through Ponseti method, which includes cutting the Achilles tendon, and bracing. Under French method, realignment and tapping of the foot is done which may require a lot of effort. Kite technique is another option, but it is not effective most of the times. In about 20% of cases further surgery is required.

As the actual cause of clubfoot is unknown, it is not possible to prevent it completely. However, a pregnant women can avoid the risk by adopting some healthy habits during pregnancy. She must avoid smoking and spending time in smoky environment. Also, consuming alcohol during pregnancy is not a good option at all. Dr Ashwani Maichand recommends avoiding drugs, which are not approved by doctor, for the safety of the baby.