The Cauvery dispute is a shameful mess indeed

The Cauvery (Kaveri) basin covers vast expanse of land in Tamil Nadu and Karnataka. It also covers smaller areas in Puducherry and Kerala. Mainly, the Cauvery River has been a bone of contention between Tamil Nadu and Karnataka, but Kerala and Puducherry have entered the picture too. The issues regarding water distribution of the river between these states dates back to 1892.

Various agreements have been signed and the Centre has intervened many times in the past. But the Supreme Court’s decision, taken on September 5, has refueled the fight between Tamil Nadu and Karnataka.

The  Apex court had ordered Karnataka to provide Tamil Nadu 15,000 cusecs of water every day.  Violent protests began soon after the SC verdict. Neither the Karnataka government, nor its people were happy with this decision.

However, it does seem like Karnataka overreacted, considering the fact that it was supposed to release  the said amount of Cauvery river water just for 10 days!. It’s hard to tell if their anger is rooted in the need for Cauvery’s water. The protests appear to be more anti-Tamil than anything else. 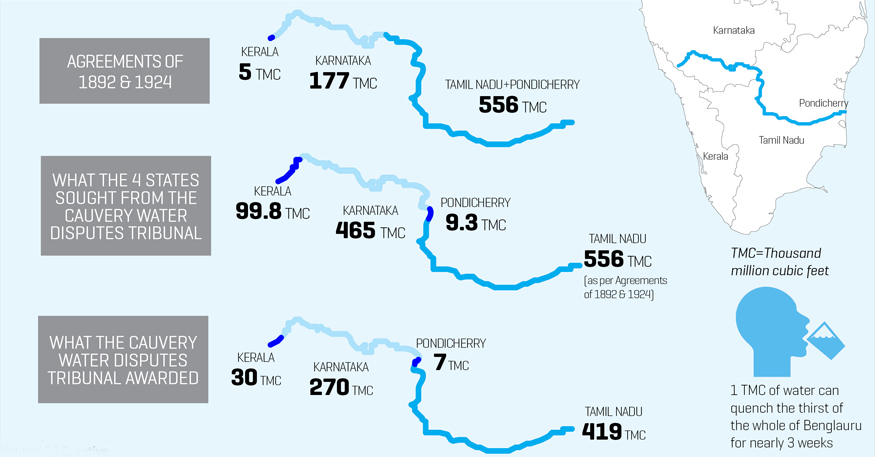 Siddaramaiah, the Chief Minister of Karnataka, wrote to Prime Minister Narendra Modi, briefing him about the whole situation. Representing the worries of Kannadigans, Siddaramaiah said if Karnataka releases 15,000 cusecs water every day ─ its major cities, including Bengaluru ─ will face acute water shortage. Factually he is right. The Supreme Court should have taken this possibility into consideration before coming up with their decision.

The SC bench modified its order only after numerous buses were set ablaze by angry mobs. Now Karnataka has to release 12,000 cusecs of Cauvery River water till September 20.

The modification hardly changed anything. Tamils and Kannadigans are completely against each other. This 124-year-old Cauvery River dispute is far from getting resolved. It’s been said that Tamil Nadu contributes less water to Cauvery than Karnataka does. On top of this, the state also draws more water from the river than Karnataka. But Tamil Nadu’s population is larger than its neighbour by almost 13 million!

How could geographical differences fuel demographical fights in a country that needs to stay united more than ever now? The Cauvery dispute is a shameful mess indeed.