Subrata Roy to launch Think With Me on Sunday, his second book in trilogy 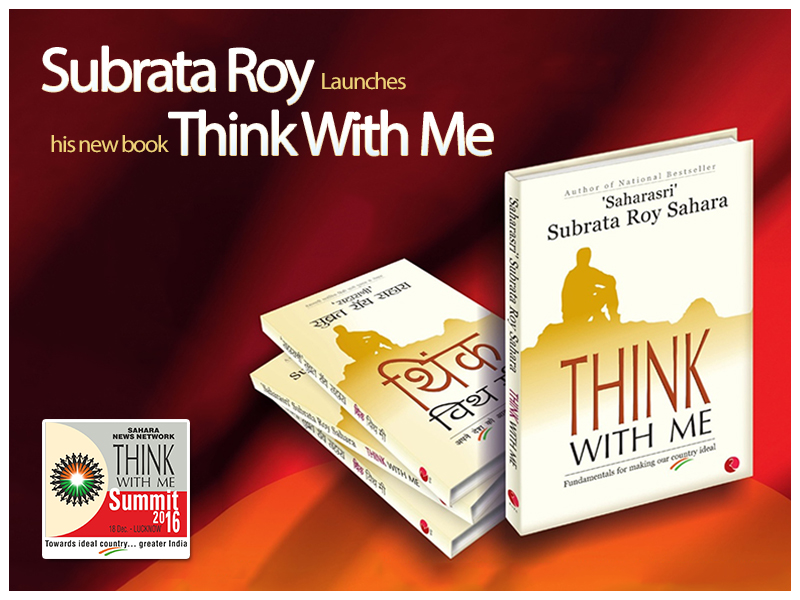 Think With Me Summit: Earlier this year, Subrata Roy penned down a thought-provoking book, where he talked a lot about life. Popularly known as ‘Saharasri’, the Sahara chief wrote his first book Life Mantras from behind the bars, and released it on February 1, which was coincidentally, the group’s foundation day.

Life Mantras provides an insight into the mind of Subrata Roy. The book treads the emotional journey of Saharasri, who wrote the book based on his trials, tribulations, and life lessons he gained during the phase.

In Roy’s own words, “To achieve peace, happiness, and continuous progress, one doesn’t need to depend on anybody. You are the master of your own destiny.”

Talking about the two personalities of a person, Roy writes: “There is no such thing as sacrifice or obligation.” He terms a mother’s love as the most unconditional and purest form of love. Roy knows better, for such an experience can only be gained after undergoing the bitterest of experiences in life. When the Sahara chief faced a rough patch in his life, most of his friends abandoned him. He was left to fend for himself. Lodged in Tihar, he realized that “emotion is the food for the ‘internal’ personality while material is the fodder for the ‘external’ one”.

His thoughts are a reflection of his experience that might have forged him in steel. He believes, if a person could include ‘life mantras’, that person would be in a better position to live a peaceful and complete life.

But Roy’s Life Mantras is definitely not an autobiography. Rather, it’s a philosophical book, Think with me Book where a lonely warrior reflects on his hardships, and dwells on ways how life can be treated as a gift. While writing this book, Saharasri announced that it was the first of a trilogy. The second, he had declared then, was going to be called Think With Me.

Less than a year later, Roy is ready with his second book. But Think With Me book is entirely different from Life Mantras. In the upcoming book, Roy will take up issues that are bigger in scale. Although not much have been divulged about his second book, we believe it shall talk about issues regarding India, and familiarize readers with the ways which can make our nation better and greater.

Roy shall unveil his book on December 18, at the grand Think with me summit organized in the same name. The big event shall bring in India’s most well-known personalities at the same podium. Among other luminaries, the ‘Think With Me’ summit will be attended by Bollywood Superstar Amitabh Bachchan, UP Chief Minister Akhilesh Yadav, Congress MPs Ghulam Nabi Azad and Raj Babbar, Yoga guru Baba Ramdev, and tennis champ Sania Mirza.

The Think with Me summit will begin at 10am on Sunday, and shall culminate with the launch of Roy’s Think With Me Book. We hope his second effort will be as interesting and enriching as his first one.

5 Responses to :
Subrata Roy to launch Think With Me on Sunday, his second book in trilogy