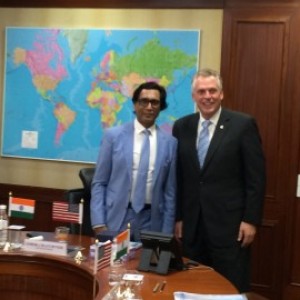 The world’s leader in flexible packaging Uflex has recently hosted His Excellency Governor , Commonwealth Terry McAuliffe of Virginia, during his visit to India. Over the past years, Uflex has emerged as a leader across India, Dubai, Poland, Egypt, Mexico and Kentucky. The brand’s standing was also felt in their grand hosting of His Excellency.

His Excellency met all the leading organizations of packaging industry which are expanding globally as a part of his business mission to India. He visited the headquarters of Uflex, one of India’s largest flexible packaging entities. During the financial year 2014-15.54% of Uflex’s total revenue was generated from international operations and transactions. The company has expanded its areas of operation covering over 140 countries all over the world.

Interacting with the Leadership of Uflex, His Excellency, Governor of Virginia said that they were indeed very pleased to meet Uflex and were excited to see their capabilities in the realm of flexible packaging business globally. They invited and welcomed Uflex to set up business in Virginia and assured them of full cooperation and support from their side.

Soon after the meeting that lasted for over an hour, Mr. Ashok Chaturvedi, Chairman & Managing Director, Uflex Limited in an official statement said that they had a very fruitful discussion with H.E. Governor, Commonwealth of Virginia, Honorable Terry McAuliffe and his delegation. Uflex’s three pronged approach of fostering innovation to create differentiation; proximity to customers and the ability to offer entire gamut of end to end flexible packaging solutions globally augurs well with Virginia’s business prospects. They are excited to take this discussion to the next level. It was extremely heartening to see a close coordination for enhancing business ties between India and United States of America particularly when his country and Brand India is making great strides under the aegis of our Hon’ble Prime Minister, Shri Narendra Modi.