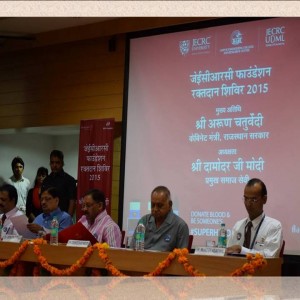 Donating blood is often believed to be the noblest charity as it is the gift of life that you bestow on the one who receives the blood that you donate. Moreover, not knowing who the recipient of your donated blood will be adds to the selflessness of the act. With a firm belief in this, Jaipur Engineering College and Research Centre promotes the charity and motivates its students to participate in blood donation. The college organizes blood donation camps every year and this year, the drive was organized on Thursday (8th October).

JECRC is proud to be receiving better response year on year, this year the number of donors who were eligible to donate being 1757. The event was promoted by JECRC with the tagline ‘Donate Blood and Be Someone’s #SUPERHERO’.

JECRC ensured that the keen donors go through a proper administered health checkup before they could donate. Director of JECRC Amit Agarwal said that the response was really overwhelming. The organizers felt sad that many were denied the opportunity to donate due to low hemoglobin, minor infections, or other reasons, but were so happy to see the intention and drive they added to the event.

India needs 40 million blood units every year, out of which only 400 thousand is available for supply. The remaining needs to be obtained from friends, family or other paid/voluntary donors. At times this high level of scarcity even proves to be fatal for the patient.

Director of JECRC Amit Agarwal said that this is what they keep in their minds and it drives them to their goal. With the aim of making sure that nobody dies of blood scarcity, the college even has a dedicated social club named Aashayein, the life saviours, which responds to blood & SDP requirements in Jaipur throughout the year by providing voluntary donors. The club has already saved about 350 lives, this year alone through SDP and on call Blood Donations.

The minister in his address highlighted the role of educational institutes in such social affairs and congratulated the college for being a pioneer in this field as well. Major hospitals of the region such as Mahatma Gandhi, SDMH, SMS along with Paras from Jodhpur arrived in the campus to be a part of this drive. With free eye check up camp conducted by Anand Hospital, Jaipur, the drive offered an insight into the donors’ general health as well.