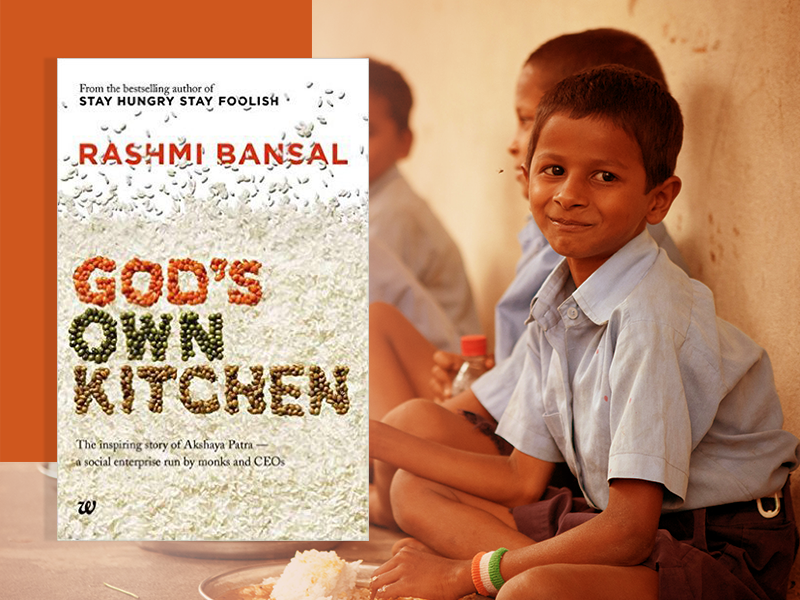 Rashmi Bansal, an author and entrepreneur, has written several books on entrepreneurship and the chronicles on tribulations faced by the entrepreneurs in their journey. In her latest book ‘Gods Own Kitchen,’ Rashmi has canvassed the journey of the Akshaya Patra Foundation (APF), an initiative of ISKCON movement that provides midday meals to deprived children in India.

At the beginning, mid-day meal program catered to 1500 children, in and around Bangalore. However, Akshaya Patra has now become the world’s largest NGO-run mid-day meal program, operating with 27 kitchens across 11 states. Currently, APF is serving over 1.6 million hot lunches to children in government schools daily.

During the book launch, Rashmi said in a statement, “From the space research programme to the growth of the IT industry and the start-up culture, I feel that Bengaluru is contributively emerging as a city for out-of-the-box ideas to find takers and change it into reality. Even the Akshaya Patra initiative is a start-up in its own way, dealing with a social issue with utmost passion and dedication, aided by technology.’

“Feeding hundreds of school children on a daily basis is one of India’s major problems. It was not something we could copy from the developed countries. This project is led by corporate players and spiritual priests like Jai Chaitanya Dasa, Madhu Pandit Dasa etc. from ISKCON, who spend plenty time and energy to make it a success. The use of high-tech technology is imperative and does play a fundamental role, but the passion and dedication of the priests and the entire APF team are also an important part of the story.”

Appreciating the APF team Rashmi further added, “Had Madhu Pandit Dasa and Jai Chaitanya Dasa followed the customary path, they would have been big wheels in some large corporation today.”

Akshaya Patra initiative is one such project that has managed to eliminate a basic need (hunger) in society. At times, the foundation has even surpassed the governments own mid-day meal programmes.

3 Responses to :
Rashmi Bansal’s Book God’s Own Kitchen canvasses the inside story of Akshaya Patra Foundation