Qutub Minar, a UNESCO site, is one of the most famous monuments of India. It’s a part of the Qutub complex which also includes marvels such as Quwwat-ul-Islam mosque, Alai Darwaza, the tomb of Iltutmish, among the others.

A 7.2 meters tall marvel gracing the Qutub Complex, the iron pillar is one of the world’s foremost metallurgical curiosities. It is well- known for its unique rust- resistant composition and holds a testimony of the ancient Indian craftsmanship. The pillar exhibits no signs of its age at first glance, however the detailed analysis of the inscriptions by historians links it to the Golden Age of Gupta Empire, says the well-known industrialist Sanjay Dalmia.

To this day, no one has been able to solve the mysteries of this ancient pillar. It still stands tall in spite of many foreign invasions and drastic climate change.
As per the translations of the verses of Brahmi script engraved on the pillar, the structure was constructed by Chandragupta II of Gupta Empire in 4th century.
It describes the king as a devotee of the god “Vishnu” and records the erection of a dhvaja of Vishnu, on a hill called “Vishnupada”.

Based on paleographic similarity of the Gupta-era iconography, few historians also theorized that this pillar was initially erected at Udayagiri (Odhisa) and was later transferred to Delhi.

One theory also suggests that the pillar was moved from its original location and erected in the main temple at the fortress city of Lal Kot at Delhi when it was found by the Tomar king, Anangapala II, in A.D. 1050. This information is based on an inscription on the pillar itself. When in the Second battle of Tarain, Prithiviraj Chauhan lost to Qutb-ud-din Aibak, Qutb celebrated it by erecting a mosque, called the Quwwat-ul-Islam in Lal Kot on a temple’s base. Fortunately, the pillar wasn’t removed or destroyed otherwise we wouldn’t have been able to witness such ancient structure. 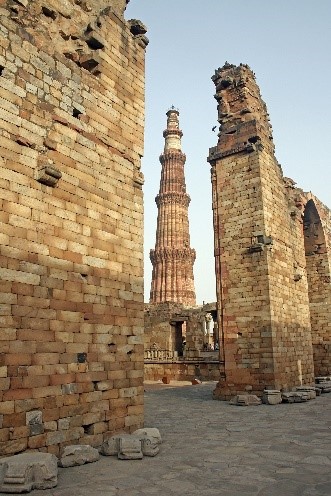 Mr. Dalmia added that as per an estimate the pillar weighs over 5 tons, so the question of how it was moved still remains a mystery. The questions still haven’t been answered, thereby leaving people more curious about the capability of the ancient India, making it a subject of scholarly discussion.

Alongside the above dynamic mysteries, the most talked about topic would always remain its anti-corrosion properties. It’s difficult to analyze the techniques which were used in the Ancient India, says Sanjay Dalmia. How well advanced were they to have erected such a heavy pillar, made up of 98% wrought iron?

The presence of humidity is among the major factors for rusting of iron. Hence a general consensus is that Delhi’s non- humid weather has aided the pillar’s ability to resist the corrosion. Scientific discoveries however show that the corrosion resistance results from an even layer of crystalline iron hydrogen phosphate hydrate forming on the high-phosphorus-content iron, which protects it from the effects of the Delhi climate.

All of these questions can make any one curious with an urge to re visit the bygone era. But at the end, all we can do is appreciate and bow down to their advanced craftsmanship in metallurgy. We need to acknowledge the achievements of our ancestors and thank them for such monuments which take us back to that glorifying era.