Think with me : India has emerged as one of the fastest growing economies in the world due to its notable economic growth in recent years. The country has the sixth-largest economy in the world, measured by nominal GDP, and the third-largest going by its purchasing power parity (PPP), after the United States and China. 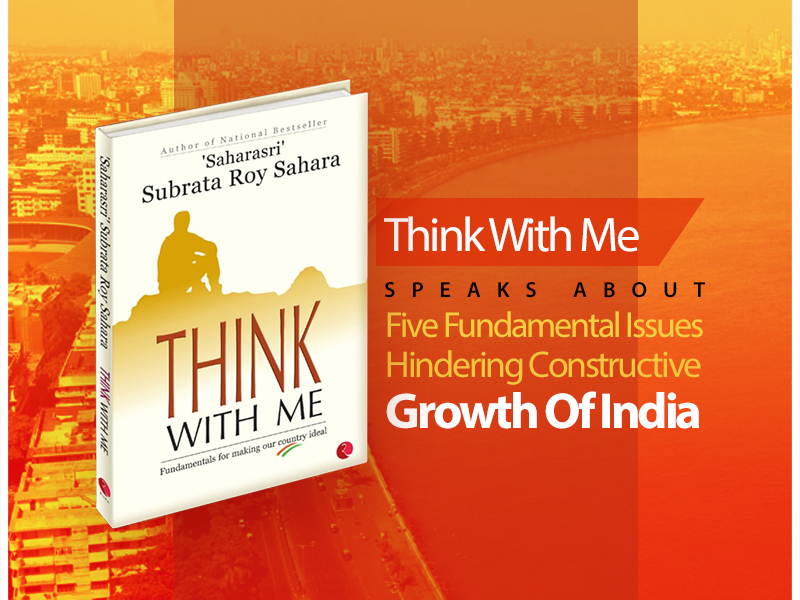 Although India’s economic growth has been remarkable, yet it is accompanied by abject poverty, enduring socio-political instability and increasing regional disparities. The prevalence of extreme poverty remains consistent. Major sections of India’s population are still deprived of basic health and education.

Sahara hosted the national icons from political, spiritual and cultural sectors in India’s mega event “Thinkwithmesummit” for addressing obstacles faced by India as it progresses towards becoming a modern economy.

Infrastructure development has been allied with economic development, as higher infrastructure investment results in greater output. During the “Thinkwithmesummit,” Saharasri Subrata Roy Chairman of Sahara India Pariwar, said, “India’s poor infrastructure is the “biggest roadblock” in government’s flagship “Make in India” initiative.” The Centre has committed to enhance the infrastructure of the country.

It cannot be doubted that the technical skills and competencies have a direct impact on the pace of development. As the scientific and technological knowledge is advancing, humans are progressively discovering sophisticated techniques of production to increasingly hoist the productivity levels.

Although India has gained from a high percentage of English speakers, yet the illiteracy level is very high. It is worse in rural areas and especially amongst women. More than 50% of Indian women are illiterate, which limits the overall economic development.

Corruption has gone out of control in India at various levels and it is operating as a negative aspect in the nation’s growth process. Until and unless India eradicates corruption in its administrative level, it is obvious that the traders, capitalists, and other powerful economic classes will go on with exploiting the national resources for their personal interests.

India’s experience throughout the course of development planning is a working example. The rising monopolies in different industries and concentration of economic influence in the modern sector have become undisputed facts.

It is expected that the economic growth will help place the poor above the poverty line. However, the economic growth has been excessively benefiting the wealthy. A lot of the rural poor are yet to enjoy any significant benefit from the India’s economic growth. At present, over 76 million homes are deprived of electricity, and 33% of the population survives on less than $1 a day.

Think with me book says these challenges must be addressed in ways that improve India’s interests in social and economic development collectively.

21 Responses to :
Think With Me Speaks About Five Fundamental Issues Hindering Constructive Growth Of India