Alpana Bhartia and her People for Animals (PfA) team witnessed a miracle of nature last week. Two eggs laid by a rescued pond terrapin hatched under the watchful eyes of the veterinary team at the PfA Wildlife Hospital in Kengeri, one on the 25th and the second on the 30th of May.

An Indian pond terrapin was brought into the hospital after it was run over by a vehicle a few months back. The broken shell was treated and patched together using orthopedic screws and wires, and the animal was put under observation. Subsequently, she was moved to a larger enclosure for recovery. It was here, on October 6th that she laid a clutch of 5 pale white, leathery eggs which were carefully collected by the team and placed in a tray with sand bedding for hatching. Unfortunately she succumbed to the trauma of her injury. Nevertheless all attempts were made to save her off-spring. It would be interesting to note that these reptiles do not incubate their eggs, instead lay them in places which provide for the required thermoregulation. 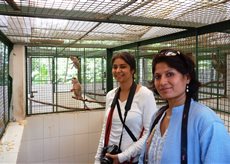 Terrapin eggs take an average of 8 to 10 weeks to hatch. On seeing no activity after ten weeks, perturbed Alpana Bhartia concluded that the eggs hadn’t been fertilized. However, the eggs were left as is in the tray and this optimistic gesture turned out to be one of the best decisions. Two of the eggs hatched to produce two very healthy terrapins.

“It is a matter of great joy that PfA was able to ensure that at least two terrapins have been incubated successfully and got to survive against all odds in spite of losing their mother at a critical stage of development. The conservation of animals such as these is what PfA strives for” says Mrs. Alpana Bhartia, founder trustee of PfA.

Says Dr Karthik, Head Veterinarian, PfA – Bangalore: “Reptiles such as these lay their eggs when under stress and trauma like this. We initially presumed that this too was such a case. However, we decided against discarding them. This has turned out to be one lucky decision.”

The veterinary team reports that the hatchlings are healthy and have begun to hunt for mosquito larvae. Dr Karthik further adds: “These little hatchlings are hunting instinctively and don’t need to be taught. Such is the magic of nature and evolution. We have released them successfully on the 6th of June after checking their shells, their swimming and feed intake”

He goes on to appeal to the general public to take care while driving, especially on the outskirts and on the roads that are flanked by scrub. Alpana Bhartia advises to drive slow and be on the lookout for small reptiles and other animals crossing the road.

Many reptiles, especially snakes and terrapins cross the roads in such habitats and become road-kill due to speeding. In fact, the biggest victims to road kills are not small mammals or the larger flagship species like tigers, leopards, macaques and so on, but are these reptiles. A little attention while driving can save a lot of these animals.

Dr. Shailendra Singh, Director at Turtle Survival Alliance India told PfA- “Pond Terrapins usually lay eggs during early April which hatch by the end of May. This could be a case of egg retention from her previous clutch of eggs which were prematurely laid due to the stress of the accident.” Alpana Bhartia found People for Animals with Namrata Dugar, Gauri Maini Hira, and Arushi Poddar in 1996. They have been rescuing fauna and taking care of flora for the last 21 years.