The 4-year long journey of Modi-government, and the road ahead

The Modi-led BJP government came into the power with a lot of energy and authority. It promised a fundamental change in and out. After 4 years, it is not easy to judge the success of the government, but we can at least access its direction. 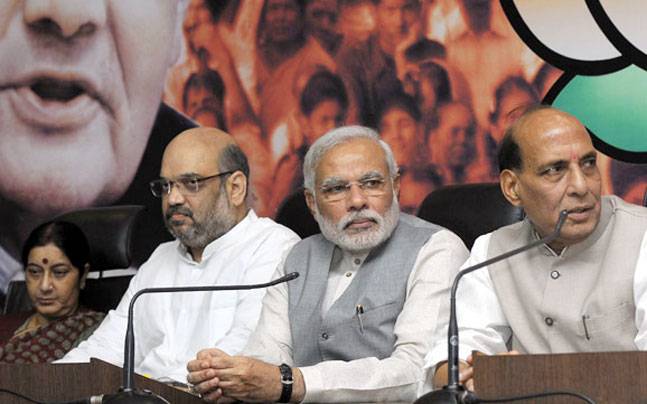 Although there is a decent support for the party across the country, there have been a number of critics as well, who have questioned the policies of the government. The Congress President and opposition party head Rahul Gandhi, has often questioned the agenda of the ruling party. He has been vocal about the atrocities committed against the dalits, adivasis and other minority groups. He has even questioned the national and international policies of BJP.

But, the real question is, what has the ruling party achieved on ground? Or at least, what amendments have been done to usher in a change? Let’s take India’s economic progress. India is one of the fastest-growing economies of the world, but credit goes to the momentum, not the current government. Instead, new reforms have hampered the progress of manufacturing sector and employment generation, which is at all-time low. Apart from this, the private investments and agriculture sector have also not picked up, which will not go down well in the Modi government’s report card.

Similarly, demonetization was yet another controversial practice, because of the faults with its implementation and the inability to tackle these faults. As far as the short-term implications are concerned, the inconvenience faced by the people doesn’t need a special mention. Demonetization has badly affected the unorganized sector and farmers.

On the political front, BJP has played a one-sided game and left its mark. Making governments in Manipur and Assam was a significant achievement for the party. However, political parties in India have been guilty of justifying everything with victories in elections, which must be avoided.

On the other hand, the situation in Kashmir has been getting from bad to worse. The government has sternly adopted the hardline strategy. The 2017 by-election in Kashmir witnessed the lowest turnout, till date. The casualties have increased combined with the pellet horror. A number of civilians have lost their lives and the issues has grabbed eyeballs on the international platforms. Apart from this, a number of youth have taken up arms since the famous Hizb Commander Burhan Wani’s encounter, which doesn’t go well with Modi’s report card.

Under the leadership of Narendra Modi, foreign relations are on the rise. India’s relations with Bangladesh are at an all-time high. Relations with Bhutan and Sri Lanka have also improved. India has also established strategic relations with Afghanistan. India has also strengthened its strategic partnerships with Vietnam, Malaysia, Japan, South Korea, Singapore and many others. The civil nuclear deal between India and Japan is particularly historic.

US has formally recognised India as a major defence partner. A weak point in India’s foreign policy has been its lack of a geopolitical vision. With capable neighbours like Pakistan and China, India can’t solely rely on a geo-economic strategy. This is what is lacking in Modi government’s report card.

Similarly, as far as the reforms are concerned, Digital India, Make in India, Skill India, Awas Yojana, Jan Dhan Yojana, Ujwal Discom Assurance Yojana, Gold Monetisation Scheme, Kaushal Vikas Yojana can be termed as positives. Technological advancement has increased in the various sectors, but the core issues have not been solved yet. Schemes and plans are made by every government. But, implementation is what defines the stand of a government and Modi Government’s report card may be lacking on that front.

5 Responses to :
The 4-year long journey of Modi-government, and the road ahead