Shiv Shena Wants Mohan Bhagwat To Be Next President Of India 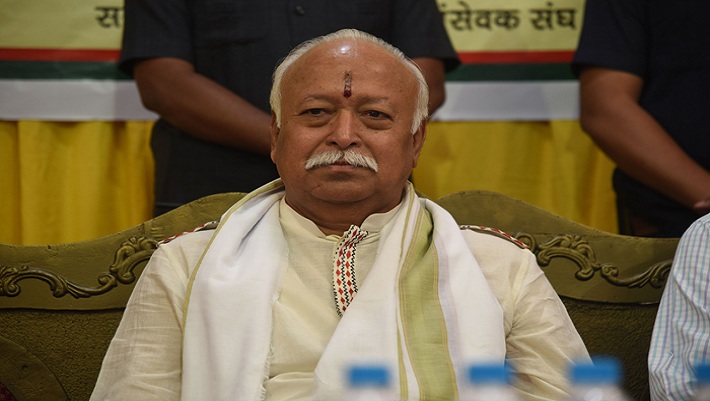 President Pranab Mukherjee’s term is coming to an end on July 24, 2017. This brings in rounds of speculations and debates as to who would take over the nation’s highest office next. According to sources, the NarendraModi government was scouting for a fresh face to fill in the position.  Bharatiya Janata Party (BJP) leaders were certainly anticipating support from smaller parties like the Shiv Sena in the impending presidential election. However, Shiv Shena’s latest surprise proposal has definitely caused a stir in the political corridor.

Shiv Sena head Uddhav Thackeray proposesRashtriya Swayamsevak Sangh (RSS) Chief Mohan Bhagwat’s name to be the next Indian President. Not a huge fan of secularism, Shiv Shena takes a stand that India must be a ‘Hindu Rashtra’.

Sounding pretty sure about the party’s choice, Uddhav told a reporter on Sunday at Aurangabad, “The formation of a Hindu Rashtra is the primary objective and hence, Mohan Bhagwat should contest the presidential election”. When questioned if Bhagwat would be the right person to take their ‘Hindu Rashtra’ dream forward, Thackeray said, “Why not? At other places RSS candidates get appointed to important positions, then why not appoint him as the President of India?”

The Shiv Sena had twice recommended Bhagwat as National Democratic Alliance’s (NDA) potential presidential candidate in the past. However, the RSS head had always maintained that he was not interested in contesting for the country’s top post. But Sena definitely seems to have an agenda behind the proposal.

Sanjay Raut, Shiv Shena’s senior leader, and Rajya Sabha MP, also talks about creating an atmosphere of ‘Hindutva’ in the country. “If the RSS chief is made the President of the country, then the dream of a Hindurashtra (Hindu Nation) could be fulfilled,” Raut wrote in a column in the party’s mouthpiece ‘Saamana’. He advocates that if Bhagwat gets the Presidential position, all the long-standing demands and issues like the uniform civil code, Ram Mandir, Article 370 in Jammu and Kashmir, etc., would be addressed.

The BJP and Shiv Sena have been at loggerheads since many years. With reports of Shiv Sena chief Uddhav Thackeray favoring Mohan Bhagwat as India’s 14th president, BJP must surely be in a fix.

There are many in the country who already dread the shocking aftermaths as the wave of Hindutva hits India. Would India lose its secular stance? Can transforming India into an all-Hindu nation guarantee peace? Well, let’s keep our fingers crossed for now and hope for a deserving name as India’s next President.