In recent years, the Indian real estate has come a long way. From the time when there were only a few tall buildings visible in the country, to this time when sky scrapers are being constructed all around, the change is evident. However, the appreciation for the progress needs to be placed where it is due. Some of the names including Niranjan Hiranandani, Chandru Raheja and Adi Godrej, etc., have been instrumental in bolstering the realty sector. Here are some of the major real estate companies in India who have contributed immensely to the growth of real estate.

Founded on February 8, 1985, the company’s maiden name was Sea Breeze Constructions and Investments Private Limited. Under the leadership of Adi Godrej (Chairman, Godrej Group), Godrej Properties was formed as a subsidy of Godrej Industries Limited in 1990. The Chairman is also a recipient of one of the highest civilian awards, the Padma Bhushan Award. Under his leadership, the company has a host of projects in both residential and commercial spheres, and is active in many major cities across India, including Chandigarh, Mumbai, Hyderabad, Chennai, Gurgaon, Pune, amongst others.

With more than 39 projects developed at locations across Mumbai, Oberoi Realty is based in Mumbai, Maharashtra. The company, led by Vikas Oberoi, Chief Managing Director, has its main interest in office spaces, residential. Hospitality, social infrastructure and retail. The company has also won praise for Three Sixty West, the second tallest tower in India. It believes in innovative offerings amalgamated with modern architecture and state-of-the-art construction.

A company that speaks of it 60-year-old legacy, K Raheja Corp is led by Chandru Raheja (Chairman), along with his two sons Ravi Raheja (Group President) and Neel Raheja (Group President). Making a noticeable impact on the realty sector, the company has been delivering unique commercial and residential spaces. Also, a major contributor to the green building sector, K Raheja Corp signed an MoU with the CII-Green Building Council to construct green buildings in 2007. Another major development by the organization is that the buildings developed by K Raheja Corp classify under the Gold and Platinum categories. 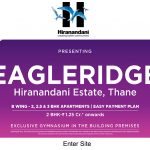 Under the authority of the co-founder and Managing Director, Niranjan Hiranandani, the company was formed in 1978. Hiranandani Group believes that success comes from its people. Serving them, every activity by the company is concentrated on the creating a rich and unique life experience for its customers. The group stands on four pillars, namely; commitment towards customers, architectural excellence, reliability and quality. With their pan-India and international presence, the organization is known for various projects like Hiranandani Gardens, Hiranandani Estate, amongst others.

Ansla API is of the leading realty family businesses in India, and was established in 1967. The company is widely acknowledged and functions in multiple businesses, including Group Housing, Malls, SEZs, IT Parks, Shopping Complexes, Hotels and more. Under the dynamic leadership of Sushil Ansal (Founder Chairman), the company has been creating modern real estate and infrastructure projects, and is committed to delivering more projects in the future.

It is these and some other names that have brought the Indian real estate sector on an international map. Not only are these businesses providing up-to-date properties, but are also changing the outlook of people towards the realty sector.