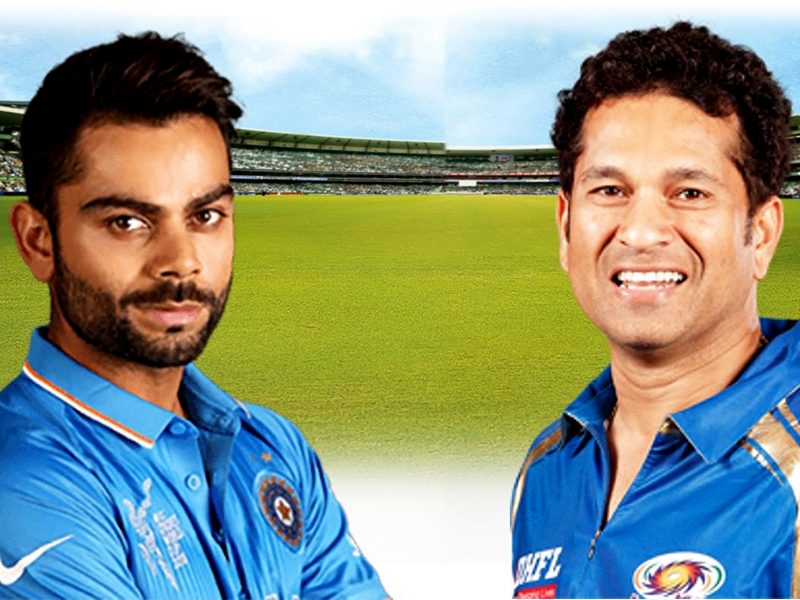 Virat Kohli , one of the best players of Indian cricket recently touched down the record of 4 double-centuries. This brings him a step closer to the hall of fame etched with names like Don Bradman, Brian Lara, Virender Sehwag, and Graeme Smith. The ‘rowdy’ right-handed batsman is known for his under-19 2008 World Cup in Malaysia where India won by 12 runs. He has earned a lot of medals on his chest. The double-century feat has us wondering, can he really beat the ‘god’ of cricket- Sachin Tendulkar? Let’s find out!

When counting Virat Kohli’s feats, we find out that he is the fastest cricketer to complete 7,500 runs in one-day finals through 167 innings. Previously, this record was held by AB de Villers, who completed the same in 174 innings. Virat Kohli is the only player whose test average beats 50 in all the formats of cricket, namely test, one-day and 20-20. Virat Kohli has made the quickest ODI century in the Indian cricket world. He managed to blast 100 runs from only 52 balls!

Sachin Tendulkar’s achievements, on the other hand, foreshadow Virat’s. Who can compete against a deity whose ODI runs run up to 18,426. Well, if you take a look closer, it’s actually possible! Virat Kohli’s current tally for ODI runs is 7,755. A difference of 10,672 runs has to be covered by Virat to beat that record. Virat’s current age is 28 years. Considering he’ll play 12 years more and retire at the age of 40, he’ll have to deliver 889 runs each year to break Tendulkar’s record. There’s enough time to chase 49 ODI hundreds as well!

So the long story short, the record is possible for Virat Kohli. However, he has a lot of work to do and needs the extra shred of luck on his side. Virat’s story is that of blood, sweat and tears. He lost his father in 2006 when he was just 18 years old. Whenever he accomplishes a milestone, he looks up in the sky and dedicates that moment to his heavenly father. We wish Virat Kohli the best for his future endeavors.

One Response to :
Virat Kohli: Chasing the God of Cricket