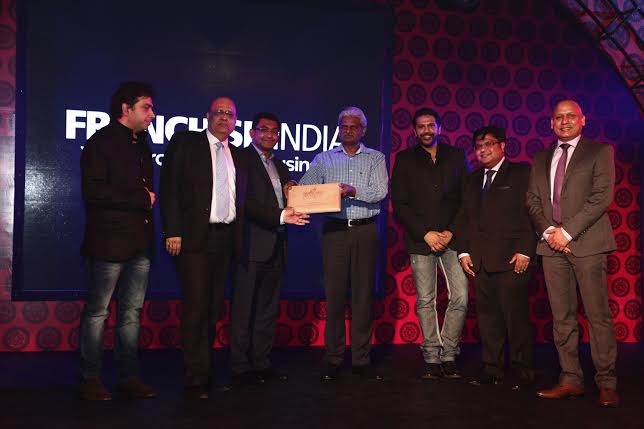 Eurokids pre-school bagged the “Hall of Fame award” at the Franchise India Awards, 2015. The event was held at Hotel Trident in New Delhi on 19th October 2015. It was graced by the presence of Mr. SBS Tyagi – Additional Commissioner of Police, Delhi, Mr. Rocky S – Leading Fashion designer of India and Mr. Gaurav Marya – Chairman, Franchise India who presented the award to Prajodh Rajan – Executive Director & CEO, EuroKids International Private Limited. It is another benchmark of success and excellence established by EuroKids pre-school. Prior to this, Eurokids bagged the ‘Best in Category’ award every year since the year 2011. With the vision of providing quality education ,contemporary learning experiences and opportunities for over-all development & growth, EuroKids is emerging as the largest education service provider with around 10-12 thousand schools across 6 different cities in the country and looks forward to add 600 more pre schools by the year 2018.Upon receiving this award, Mr. Prajodh Rajan, Co-Founder & CEO, EuroKids International Private Limited said, “We are delighted and feel honoured to receive this prestigious award. This award is a reflection of the hard work that goes into maintaining the highest standards of quality education provided at EuroKids preschools across India. We have a proven track record of building successful entrepreneurs through our unique franchise model, most of whom are women.

Franchise Awards 2015 is India’s topmost honour in Franchising. Returning in its 13th consecutive year, the Award felicitates remarkable organizations that have, demonstrated that franchising success is more than the sum of its parts. Judged by an independent panel of experts and supported by the Indian Franchise Association (IFA) & with Francorp India as process advisors, Franchise Awards 2015 rewards organizations that have shown outstanding business acumen, and achievement towards franchise driven businesses across India.

We are happy that our customers and the franchise fraternity have appreciated our sustained efforts in offering an enriching, innovative and interactive learning process. It is a great moment of pride and happiness for us. EuroKids has been perpetually successful in growing its franchise model, due to its commitment in imparting quality education and also because of the outstanding support and training given to franchise owners which helps them to grow successful businesses.”