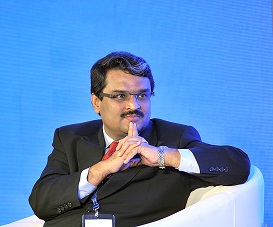 Jignesh Shah has made a fortune without having any kind of background in the field of finance. His only plus point: The aptitude to take calculated risks. He always knew that taking calculated risks is winning and winning ensures huge returns. After cashing in the technological boom that exchanges portrayed just a decade back, he realized that there is more success in running exchanges itself. Many analysts back then, deemed this to be a stupid move, but Mr. Shah proved them all wrong. His flagship group, Financial Technologies, holds a dominant market share in providing broker terminals and financial software to pre-existing exchanges. Now, he has successfully lead Multi-Commodity Exchange of India in the sixth position in commodities exchange all over the world surpassing the London Metal Exchange. His group is also exploring other avenues to venture around domains of currency and power. His eyes now seem to be set on the equity market.

Mr. Shah’s commodity exchange has already run over major players in the trade of commodities including the National Stock Exchange and other prominent financial institutions. He has the same vision for equities too. Ironically, the biggest break in Mr. Shah’s life was given by the National Stock Exchange. He was sent abroad to study markets and come back to his homeland and implement it. That never happened and NSE outsourced it. An irritated Mr. Shah and his loyal bunch of colleagues decided to quit after breaking his contract with the NSE by actually paying them starting his own financial technology-based enterprise aptly named Financial Technologies India limited.  Defeating major players in the industry, Mr. Shah successfully managed to sell his software to NSE itself. This move too was criticized just like his move on MCX-SX, but he again proved everybody wrong.

Mr. Shah now is all set to more success by setting up a whole system of multiple nations to unite in trading commodities.