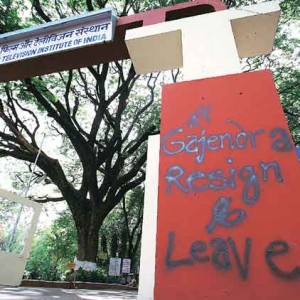 Amidst the ongoing tension concerning FTII and the appointment of Gajendra Chauhan as its chief, a new trouble has surfaced in which 82 staffers have lost their jobs at the Film and Television Institute of India, Pune. The dismissed staff members were working on contractual basis with the institution and their contracts were ended abruptly. Relief India Trust expresses its dismay over this insensitive step. The management says that the decision came from the Information and Broadcasting Ministry whereas the ministry claims it to be FTII management’s call. Trapped in this passing of buck are the families of those unfortunate 82 staffers.
FTII management claims that the dismissal is justified as the staffers were of no use since no operational work was going on in the institute because of the strike. But is this justified? What is their fault in this whole case? The students are protesting against appointment of the new chief where as the government is adamant on their decision. This must not have an adverse impact on the people who bear no relevance to this entire tussle. Relief India Trust believes that the FTII management and ministry should recall their decision and reinstate these employees. The institution which gave film industry stalwarts like Naseeruddin Shah, Om Puri, Anupam Kher and many more has already suffered enough on the account of this political scuffle. We don’t need to add the hue and cry of 82 hard working staffers to this.