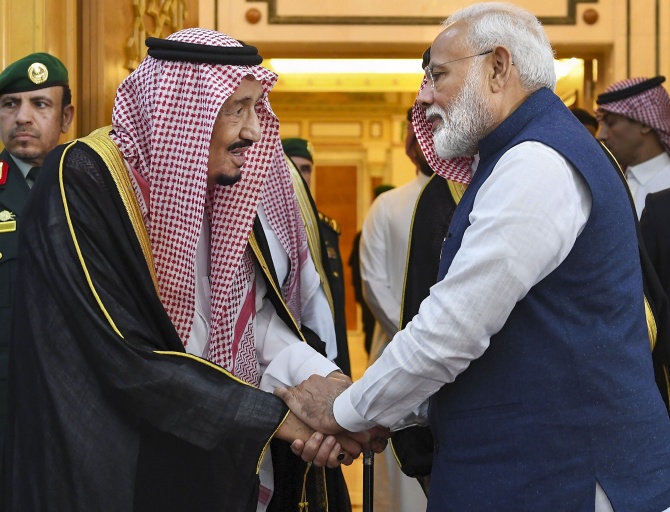 On Monday, PM Narendra Modi reached Saudi Arabia on a two-day state visit to boost bilateral ties in between the two countries. He is visiting the kingdom on the invitation of the King of Saudi Salman Bin Abdul-Aziz Al Saud.

On Tuesday, while speaking to media on his visit to Riyadh, the Prime Minister stated that “I believe that Asian powers like India and Saudi Arabia share similar security concerns in their neighbourhood.”

In a powerful statement made by the Indian Prime Minister in Saudi, he made it clear to Saudi that both the nation shares a common threat against peace and stability of both the prospering nations. The Prime Minister is visiting Saudi at a time when Pakistan has recently unsuccessfully tried to rally other Islamic countries against India on the Kashmir issue.

On the other hand, India has been a victim of Pakistani based terror group for around three decades. Due to active and collaborative work of intelligence and security forces, India has been prosperous in nullifying Pakistan based terror activities in the Indian territories.

In the past few years, Indian has decided to change the policy paradigm forever to prevent cross border terrorism. India has decided to attack several terror launch pads working outside the Indian territory with the use of the Indian military.

Providing a permanent solution to the Kashmir solution, India recently revoked some of the temporary provisions of Article 370 of the Indian Constitution of which Pakistan was trying to falsely portray the situation as tribulation on the part of the people of Kashmir.

India, Saudi and countries from across the world will have to come together to annihilate the problem of terrorism in any form, and PM Modi has made it clear from several platforms.