Report card on 3 years of Modi Government. Are Acche Din still round the corner? 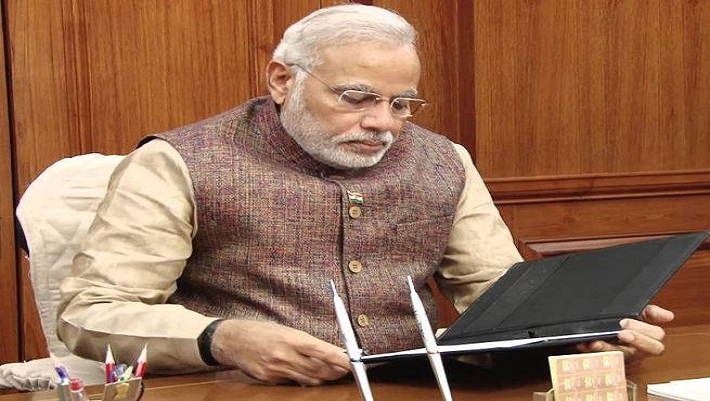 Narendra Modi from the Bharatiya Janata Party (BJP) became the 14th Prime Minister of India with an unprecedented majority in the 2014 LokSabha Elections. A promise of acche din or good days ruled over the public perception since the beginning. But three years down the line, the Modi government’s performance still calls for a mix of yeas and nays. Here’s a brief report card on Modi’s reign, till date:

Pradhan Mantri Jan-Dhan Yojana (PMJDY) or the National Mission for Financial Inclusion ensured the presence of each Indian citizen in the country’s banking system. A bold step by the Modi government, the plan did fight poverty and seemed a good mechanism to withstand the heat of economic down surge. However, banks throughout the country had to incur heavy losses for opening accounts under the program.

The ‘Make in India’ campaign had twin objectives: transforming India into a manufacturing hub and, generating employment for the youth. As far as FDI is concerned, the campaign managed to bring in a flood of dollars to the country. But looking closely, the roaring lion seems to be a lumbering Indian tortoise. There have been no meaningful fluctuations in terms of rise in the share of manufacturing in GDP or increase in job opportunities.

One of the most daring military operations by the Indian Army, the Surgical Strike across the Line of Control in Jammu and Kashmir targeted Pakistani terrorists who were waiting at multiple launch pads to tactfully cross over into India. A whopping 81% of Indian citizens felt that this move by the Narendra Modi government certainly improved India’s image and influence in the world.

A great initiative by the Modi government, the Swachh Bharat Abhiyan or Clean India Movement aims at maintaining cleanliness in the country. The government has claimed to have set up more than 21 million toilets in India so far. As per a survey, around 75% people agree that the mission made their cities cleaner. However, there are many across India who are still facing challenges related to cleanliness in their locality or area.

Prime Minister Narendra Modi’s demonization exercise was meant to fight corruption and weed black money out of India. A majority of polls in the country point towards the fact that the surprising note ban was indeed a decision in the right direction. More than 51% people responded in affirmative when asked about the efficacy of this historic economic reform.

The Modi government’s efforts at job creation have remained debatable so far. It was found that the unemployment rate has risen by 20%. More than 63% people in the country feel that joblessness is a major issue that needs to be addressed at the earliest. A recent wave of layoffs in sectors like IT, banking and e-commerce reinstate the perception.

The law and order condition in India remained a huge roadblock to India’s success in Modi’s rule. More than 60% people in the country are of the view that the crime rate, especially against women and children, has gone considerably high. A majority of citizens still feel threatened and unsafe in India.

All we can do is be optimistic about the remaining two years. Hopefully,2019 will present a picture more favorable than this one.