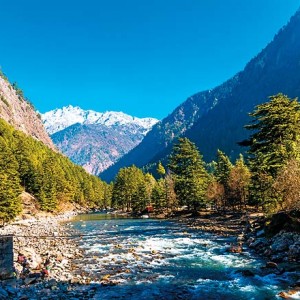 A Volvo has never been my choice when it comes to journey to the hills. I usually prefer open window seat to let the cold breeze enter my lungs and freshen up my life, pass through my ears, making a whistling noise and I can blush as an after-effect and surprise my vision with mesmerising views. I want each of my senses to live throughout the journey and I recently completed one into the warm heart of one of the coldest destinations of Himachal, Kasol.

Avoiding the heavy snowfall of December and January, I decided to explore the valleys of Kullu district during the melting season of February. After the bus dropped me and my friend at Bhuntar at 6 in the evening, we took a cab to reach Alpine, a destination suggested by one of my friends, who liked the view and I loved the same when I reached. An hour journey was worth as we sent through valleys, bridges and an experimental geothermal energy plant, which has been set up there.

The bridge on Parvati River is just a few meters away from the Resort and you can easily take a walk to reach it. The backyard of Alpine also makes a beautiful view of this mesmerising sight possible with an access to the place. The floating river sings the lullaby for the guests during the night when other things become as stable and calm as a Monk’s mind.

We had the plan to go to Tosh Valley and we started our journey at 8 in the morning. The valleys were covered in white due to snowfall a day prior to our arrival. The heightened mountains were so picturesque as if Michael Angelo stroked his brush on the peaks. It was so cold that a shot of Rum was necessary to keep the body warm and complete that trek of 3 km.

While coming back from Tosh, we felt somewhat religious and decided to stop at Manikaran for a while, from where our pavilion was just 4 km away. The hot spring just adds a cherry on the top, where we couldn’t spend more than 2 minutes because the water was almost near boiling point. The market of Manikaran is just perfect for wooden crafts if you plan to shop something from Kasol.

The two-day-turned-one-day trip is just unforgettable for both of us, especially me, who rarely gets a chance to get off the monotonous routine of office life. And why I said that it was a two-day plan because initially we planned to visit Malana as well but couldn’t execute the same, due to the blockage of the path, which was 3 hours’ less journey than the path that was open. So, another 3 hours’ walk was out of question for both of us due to MANY reasons.

I enjoyed that single day anyway as I lived my whole month’s life in just one day.