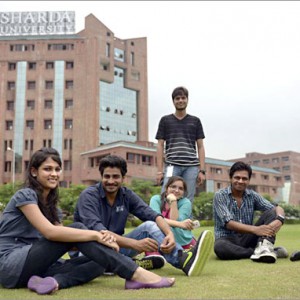 Sharda University has recently undertaken a noble initiative towards women empowerment which has stirred inspiration in all its students. The university organized ‘Mega Female Safety Riding Camp’ which was focused on the twin objective of driving and women safety. The event was a huge success as it saw participation from many students.

The event was organized on 4th and 5th of September in Sharda University premises. It was held in collaboration with Honda Motorcycle and Scooter India Pvt Ltd.

The delegates were welcomed with an inauguration ceremony. To mark the beginning of the event, tricolored balloons were released. Mr. PK Gupta, Chancellor of Sharda University said that the flying balloons left an overwhelming message for all of them. They were all inspired to walk the path of freedom away from the shackles of gender inequality.

The event began with pledge signatures from delegates and students on a board which read ‘Make Indian Roads Safe’.

Women were taught the basics of riding a scooty. It started with teaching them the correct riding postures which was followed by acceleration practice. The event saw a participation from over 200 women who were then also given a riding gears practice.

After the participating women gained enough training of the gears and acceleration, they were taken on road for a short distance practice. This boosted their confidence and this followed a long distance practice for them.

Mr. Gupta, overwhelmed with the response the initiative fetched, said that he was really excited to see the enthusiasm of women riders. He is really happy that Sharda University has contributed in this noble cause.  He believes that learning to ride is not merely learning to ride a scooty but with it comes a sense of self-dependence and freedom. He is really happy to see that in his students.