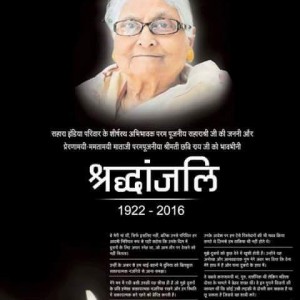 Where most of us were celebrating Mother’s Day with joy and happiness, some people, on the other hand, were going through a rough phase. Including Subrata Roy, who bid farewell to his 95 years old mother at Baikunth Dham in Sahara Shehar.
A number of renowned personalities could be spotted paying tribute to the deceased mother of Subrata Roy, from Bollywood dazzle, Amitabh Bhachchan to State Chief Minister, Akhilesh Yadav; form Head of Anti-Terrorist Front, MS Bitta to Former Captain of Indian Hockey Team, Dhanraj Pillay; Yog Guru, Bikram Choudhury to Raj Babbar, everybody, but nobody can ever console him with a ‘Don’t worry beta, I am here.’
Bidding Adieu to a mother, is not something any child would want but Sahara India Pariwar Chief had to go through all of this a day prior before Mother’s Day.

Chhabi Roy was born in Araria of Bihar and married Sudhir Roy, who passed on their legacy to their beloved son Subrata Roy along with his siblings. And the man implemented each of his inculcated thoughts, etiquettes and moral ethics in his business in such a manner that in no time, Sahara India Pariwar’s name could be seen on every hoarding & television screen, heard on every radio station & loud speaker and taken in most of the conversations and national debates.

On her funeral ceremony and on-foot padyatra, a number of common people paid tribute, prayed for her soul to rest in peace. That tells a lot about the kind of person, Chhabi Roy was. Subrata Roy himself has mentioned in his ‘Shraddhanjali’ to his mother that her optimism in life helped him and his siblings to have a positive approach towards everything.

2 Responses to :
The Ink of Subrata Roy’s pen Bids Farewell to Chhabi Roy