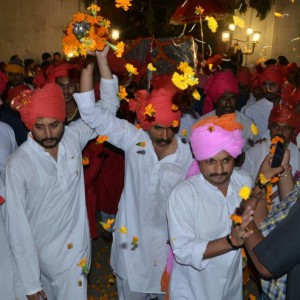 According to the people of Dewas, Dindi Yatra is a tradition that dates back to the early 1900s. Vikram Singh Puar was the torch bearer of Dindi Yatra this year. The procession started from Rajwada (the royal palace), traversed Shalini Road, Nayapura, and Nahar Darwaza, to finally reach its destination MeethaTalaab.

At Meetha Talaab, the Dindi Yatra palanquin was halted for prayers.  Devotees recited hymns and offered prayers to God. The residents of Dewas were delighted with the procession. Janmashtami, being a popular Hindu festival, drew great enthusiasm from the common folk of Dewas, who zealously took part in the celebrations. According to the locals, this year’s Janmashtami celebration was one of the largest they had ever witnessed.

The Janmashtami Puja began with Vikram Singh Puar cleansing the idol of Lord Krishna. Next, he offered ‘Banta Bhog’ (a Prasad made of milk and other dairy products) to Lord Krishna. At around 10 am, the idol of Lord Krishna was bathed with Panchamrit – a mixture of five major ingredients, viz., Ganga jal, ghee, curd, honey and sugar. The idol was then decorated with exquisite ornaments and draped in glitzy yellow dress.

After the royal family including Vikram Singh Puar made their offerings to the deity, the devotees were allowed to have ‘Darshan’ of Lord Krishna and offer prayers to Him. Dahi Handi was another notable event at the Janmashtami celebrations, where devotees formed human pyramids to break pots hung at a certain height.

Later, the Dindi Yatra procession passed through Nahar Darwaza, Pathan Kuan and Bada Bazar as it finally headed back to the royal palace (Rajwada).