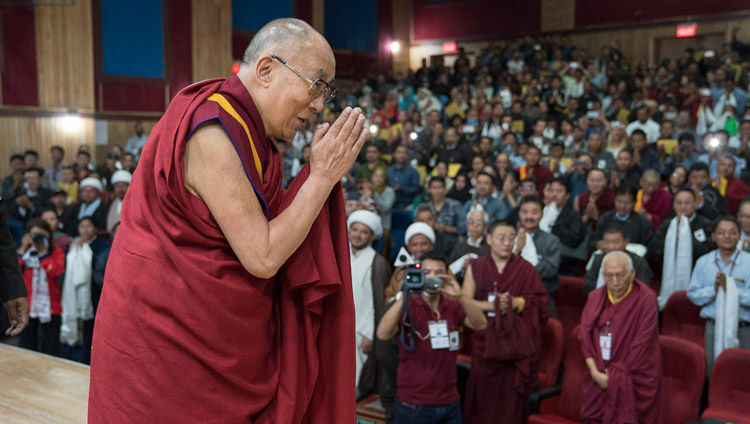 India has a significant role in world peace: Dalai Lama

Kolkata, Jan 13 (IANS) Expressing concern over religion being used to fuel conflicts and killings, Tibetan spiritual leader, the Dalai Lama, Tuesday said India with her long history of secularism and ‘ahimsa’, has a significant role to play in world peace.

Participating in a Merchant Chamber of Commerce and Industry-organised interactive session, he also lamented over the existing education system being oriented only towards materialism.
“With her long tradition and history of ahimsa and secularism, India can make significant contribution towards world peace particularly now when there are so many conflicts and killings,” said the Nobel laureate.
“It is very sad that religion is being used to fuel conflicts. In the name of religion, division is being created. Despite India’s pluralism, there is respect for other religions even though there may be disagreements and debates. That is why I say, India has a major role to play,” he said.
Asserting that faith and reason were complimentary to each other, the Dalai Lama urged students to analyse and experiment with their knowledge instead of just copying what the books and the teachers say.
“One should not follow anything without going into the reasons. Even some of Buddha’s teachings have been rejected by scholars because they went against reason. Therefore, we must analyse, investigate and if possible experiment with the knowledge instead of simply copying them,” he said.
He also called for keeping the mind free from any bias while acquiring knowledge.
“If I remain biased towards Buddhism, I will never be able to appreciate other religions. The need is to keep the mind free from all biases. That is why I admire genuine scientists because they are neutral and work for the humanity without any biases,” he added.